Who: Me and sporadically my mom

Where: My mom’s house

Why: No clue. Peer pressure? Because I’m a lemming?

Tonight is football LII (or 52 for those that struggle with Roman Numerals) and I am going to watch the whole game. Well, at least be in the same room as a tv showing the game with the sound on. Baby steps. But before I get going, let me start at the very beginning, such a very good place to start (thanks for the tip Fraulein Maria) with my telling you I have no actual interest in football–the rules, the rivalries, or the spectacle of the game itself. What I do care about are kneeling players and CTE brain damage, but that is a discussion for another time. If you’re looking for a nuanced recap of the game with some relevant or valid insight look elsewhere. 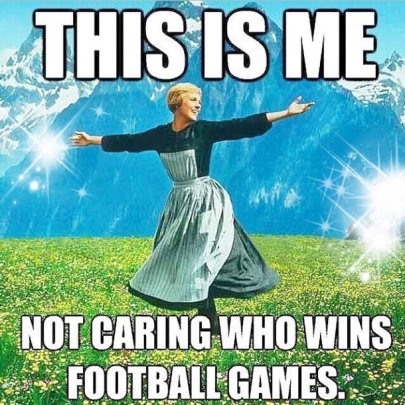 Now that we’ve got the disclaimer out of the way, here are my live blogged thoughts so settle in:

Took a break to read reactions to Kylie Jenner’s baby announcement and re-watch her video. I am unreasonably emotional about this. Like, everyone knew she was pregnant but the confirmation and video after literally months of speculation were so well done. I’m so proud that the KardJenner’s managed to steal attention from the Super Bowl. Four for you Kris, four for you. #KrisJenner2020

Congratulations My Sweet Kylie! What a magical ride it's been! I'll miss you bumping along with me. Never in a million years did I think we would do this together but it's been that much more special because of it. God is so great!! He had His plan all along! I love you little mama 💕 love big mama

Took the dogs for a walk and forgot my gloves. Mistake.

Feminist thought interruption: I like that NBC has a female sportscaster on the field doing interviews but why no women announcers?

And now for what I consider the main event: the Super Bowl Halftime Show

No Janet (Ms. Jackson if you’re nasty) and no N’SYNC reunion even though that was never really a rumor. Why was that performance so lackluster? The guy can still dance and sing but the whole production felt half-assed in a way the last few years definitely have not. And someone please explain to me why they allowed him to dress like a lost hunter. Justin get back to the woods from whence you came.

Now that I’ve seen Pink and Justin (both in camo what does it mean?!!) what’s left to watch? Oh right the football game.

The Philadelphia Eagles have beaten the New England Patriots and the Super Bowl is finally over. Gatorade has been poured on people, confetti has rained from the sky, and everyone is ready to turn off the tv. Except! This Is Us is airing a critical episode tonight. Why would they do this to me? I just can’t fathom dragging myself through that emotional minefield now so it must wait for tomorrow. Give yourself a round of applause if you made it to the end of this post. As a reward I leave you with this: