It’s Ladies Night at the Olympics

The female athletes dominated my TV Thursday night and I couldn’t have been happier about it.

First up, US women’s hockey won against Canada in an overtime shootout bringing home the gold. It’s the first time we’ve won since 1998! That’s twenty years!

Lindsey Vonn got a bronze medal in skiing and Mikaela Shiffrin got silver (not in the same race, I just don’t really understand the differences between their events).

Okay, now that that’s out of the way we have to talk about women’s figure skating because I HAVE A LOT OF FEELINGS.

South Korean Kim Ha-Nul skated to selections from Mamma Mia, but not the movie soundtrack with Meryl Streep, probably the Broadway version. Her costume was beautiful and would have been perfect for an ice wedding. Weirdly, she skated to only slow songs (I was hoping she’d bust out the titular “Mamma Mia”), like “The Winner Takes It All” which felt a bit on the nose considering the lyrics are: the winner takes it all/ the loser standing small/ besides the victory/ that’s her destiny. Um, yeah, she didn’t medal.

Canada’s Gabrielle Daleman (who looks like a long-lost Kardashian sister, but in a positive way) had a disastrous skate. Tara called it heartbreaking, and have to agree. She fell on almost every jump and by the end I was watching through my fingers. Her music was “Rhapsody in Blue” which my brain associates as the United Airlines theme song because I’m so cultured.

On to the Americans who were not on their game.

First up of the trio was Karen Chen who skated to “Jealousy Tango”. Honestly, this was really boring. Next!

Bradie Tennell, who’s from outside Chicago (hey girl hey!) skated to the Cinderella song “A Dream is a Wish Your Heart Makes”. Presumably, hers was to medal at these Olympics but that didn’t pan out. She looked like she was auditioning for the role of Cinderella for Disney on Ice and I’d probably cast her for it.

Mirai Nagasu skated to Miss Saigon and failed to land her triple axel as well as a few other jumps. I felt so bad for her but at least she nailed it once, making her the first woman to do so at the Olympics. NBC kept cutting to her parents in the stands and commenting that their restaurant was closed so they could watch their daughter at the Olympics. I mean, that makes sense to me, I’m not sure why they kept harping on about it.

Kaetlyn Osmond of Canada got the bronze medal with her stunning skate to Swan Lake. As our friendly neighbor to the North, can you come and give a lecture on landing jumps to our skaters? K thx.

Let’s check in with Tara, Johnny, and Terry:

Now, let’s get to the good stuff.

NBC aired a video package with Tara narrating on the rivalries in women’s figure skating. I can’t figure out how to embed it so go watch it here. No seriously, it’s great.

Of course it mentions Tonya Harding and Nancy Kerrigan (the OG rivalrists), but also interestingly, Tara and Michelle Kwan. I remember watching the 1998 Nagano Olympics and dancing around the living room pretending to be Michelle while my younger sister did her best Tara impression (my youngest sister was barely mobile at this point so she was Nicole Bobek by default). This was Michelle’s time and all of a sudden this upstart fifteen year-old (Tara) shows up on the scene and steals her thunder! Tara has redeemed herself in my eyes by teaming up with Johnny, but Michelle remains the number one ice princess of my heart.

Yevgenia has been number one in the world for two years, and this Olympics was supposed to be the apex of her legacy. Not only that, but her skate was to Anna Karenina (one of my favorite books OF ALL TIME) and even included a train whistle. Her skate was beautiful and emotive and I wanted her to win.

So, what could possibly ruin her Olympics? Why a little fifteen year old upstart named Alina Zagitova (sound familiar?! Someone check on Michelle Kwan–actually she was in PyeongChang and no cameras ever panned to her in the crowd. Was it because of Tara?! I need answers NBC). Alina won the Junior World title just a few months ago and this was technically her first time competing with the big girls. And she WON.

Look, her performance was really freaking good but she only won because she did all of her jumps in the second half of her program, earning her a 10% bump. Is that fair? Technically, yeah. She took advantage of the rules and it paid off for her. But is that the same as having the best skate? No. Yevgenia had the best skate and should have been rewarded for it with the gold medal. 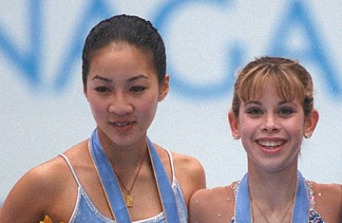 Twenty years apart (a vicennial), the US women’s hockey team wins and a fifteen year old ice skater beats the older established favorite to get the gold. What does it mean? I did a deep dive on Google and apparently there is something called the Jupiter-Saturn Cycle: it takes twenty years for the planets Jupiter and Saturn to become aligned and this is called “the great conjunction”. The next one isn’t until 2020 so its involvement in this event is irrelevant but I thought you might want to know about it in general.

All in all, the top three deserved their spots but something has to change over in US Figure Skating–after all, Beijing’s just four years away.